To challenge the traditional format and to explore the participant-public divide, the Biennale presents an original format

Launched in 1996, the Shanghai Biennale is the first international biennial of contemporary art on the Chinese mainland and one of the most influential in Asia. It offers an international exchange of ideas, while bringing together artists, curators, writers, theorists, and art supporters from all around the world. In occasion of its 13th edition, to challenge the traditional format and to explore the participant-public divide, the Biennale presents an original format; it is unfolding over the course of nine months as an in crescendo project made of 3 phases.

It began in November 2020 with Phase 01: A Wet-Run Rehersal (November 10–14, 2020). A summit bringing together contributors to present their work in the form of a performative assembly taking place in the Power Station of Art’s Grand Hall and spreading out to networks of art spaces along the Yangtze River, as well as online.

Then Phase 02 followed: An Ecosystem of Alliances (November 15, 2020–April 10, 2021). Five months of activity and programming. This allowed the artists, thinkers and curators involved in the Biennale to develop their work in close collaboration with the City of Shanghai, its people, networks of activism, organizations, and institutions.

The Phase 03 is the one related to the displaying of artworks: An Exhibition (April 10–July 18, 2021). The Biennale concludes with an exhibition that will run through the PSA and expand into a series of locations along the Huangpu River and across the city of Shanghai.

The 13th Shanghai Biennale is titled “Bodies of Water” and is a tribute to our Earth and its extraordinary systems, included our human bodies. It is inspired by the homonymous book by the scholar Astrida Neimanis, who is specialized in Gender and Cultural Studies, such as posthuman feminisms, experimental writing methods, nature/culture, water, climate change and environmental humanities. “The flow and flush of waters sustain our own bodies, but also connect them to other bodies, to other worlds beyond our human selves”, says Astrida Neimanis.

Bodies of Water exploits the means of water as a metaphor for fluidity, interdependency and circularity and at the same time refers to its biological power as a source of life. The exhibition explores and discusses the necessity for a renewed perspective on our world, which goes beyond “human-centered and nation-based narratives to explore forms of fluid solidarity”. In a time when the earth is facing unprecedented challenges, from the accelerating climate crisis to the current global pandemic, we need to consider the inextricable interconnection of bodies. In particular, Bodies of Water will be in dialogue with the history and geography of Shanghai. The theme of the Biennale is intimately connected to Shanghai and the 5,000-meter descent of the East China Sea of Qinghai-Tibet Plateau’s meltwaters, located at the intersection of the Huangpu and the Yangtze Rivers, and in the vicinity of the human-made Jing-Hang Grand Canal. Particles dragged from up to 6,300 kilometers of sediment are metabolized by edible plants at the Yangtze Delta, China’s most fertile agricultural site.

In fact, the exhibition starts precisely with projects related to local dynamics linked to territorial issues and needs. The project Water System Refuge#1 is composed of different works focusing on the impact of local policies and post-disaster reconstruction after the 2008 Sichuan earthquake. It discusses the frequent disasters in the upper stream of the Minjiang River.

On the same floor, videos, building materials’ collections, minerals and organic matter’s landscapes and installations dig into the relationship between water and geographies, territories, and human activities, driven by the aim of learning from the history and presence of disaster.

The artist Torkwase Dyson bases his project Bird and Lava on the concept of Blackness as an architectonic developed out of liquidity (ocean) and its geometric abstraction. The conceptual framework has grown around the Yagtze River.

Very interesting is also the narrative about the link between water and architecture and urbanism, as for example in the work Urban Aqualoop by WORK Architecture Company. This project delves into the idea of “Infoodstructure” to create shared experiences connecting watering, growing, eating, and composting food in creative and sustainable ways.

A reflective, scientific and mystic eye is dedicated to the human body and his extraordinary mechanisms of fluids trasmission, production and expulsion and on the connectivity and interdependency of each part, as body and mind, and the power of the brain.

If on one side the geographical dimension of water is treated in a very political way, on the other side, many projects express it in a more poetic and phylosophic perspective, such as for example the work of Networks of Trust Upon the Ocean by Kyriaki Goni, which reflects on how watery and insular existence combine isolation and connectivity or the project Terroir (Yangtze Basin) by   Michael Wang which proposes a series of monochrome paintings referred to the Yangtze basin. Wang has sourced stone or earth from major cities within the Yangtze watershed, and had then ground these samples to form pigments.

As a designer engaged in materials’ speculation, I found of particular interest the project Bloodheads by P. Staff, in collaboration with the interdisciplinary designer Basse Stittgen. They created some sculpture made out of biological waste and reproducing some elements of the Power Station of Art’s architectural infrastructure, such as handles, plug sockets, hinges and structural support.

Since the Power Station of Art stands in front of the Yangtze river, the exhibition dedicated a place on display to it: some comfortable seats have been placed to enjoy the view of the river and stories and information about it are told.

Submission Deadline06/09/2022
The submission has ended.

“Working in the Clouds” Zhen Fund Office by asap 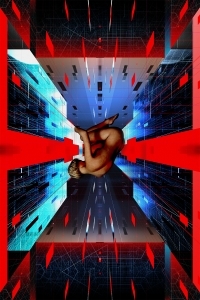