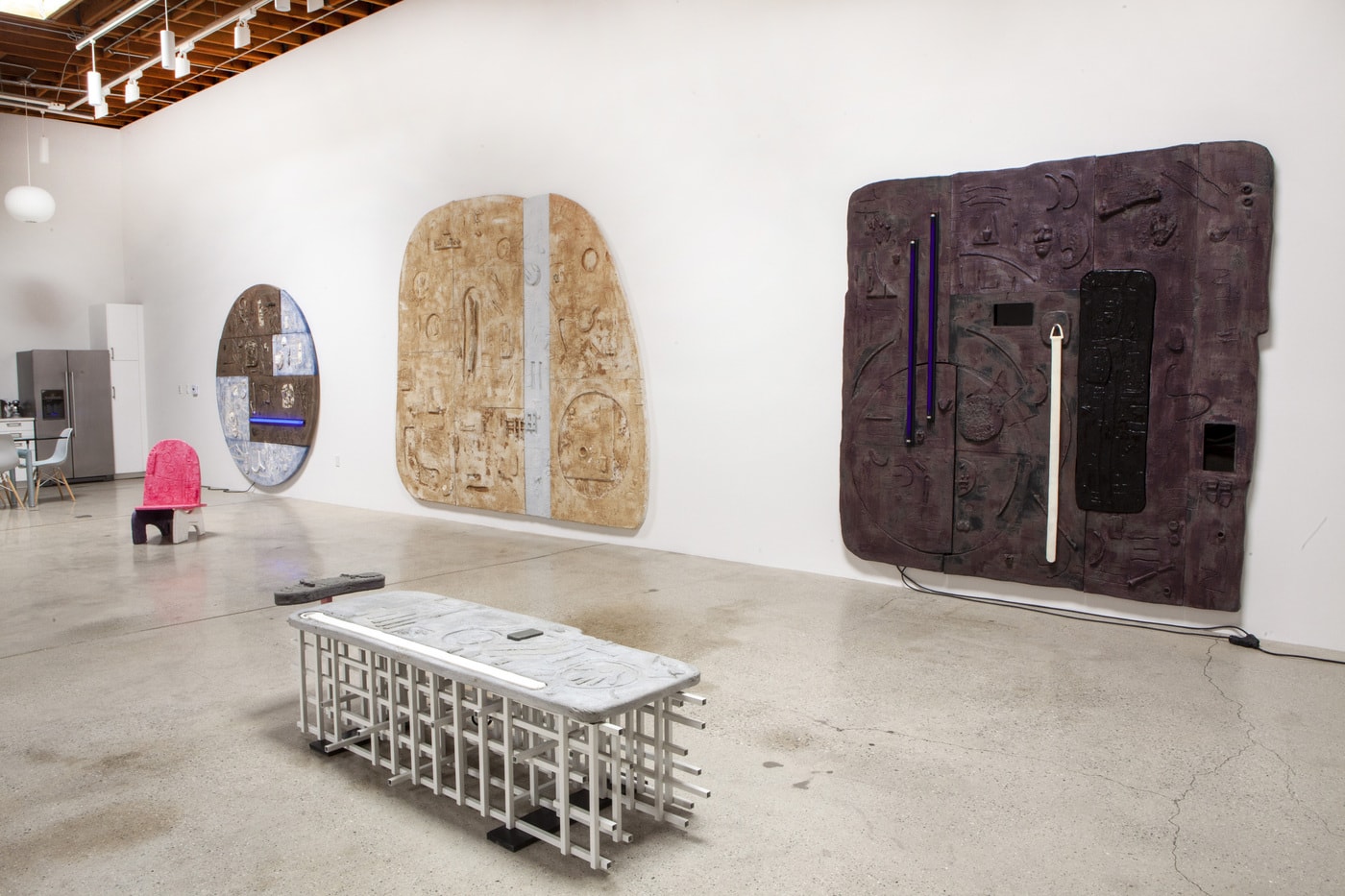 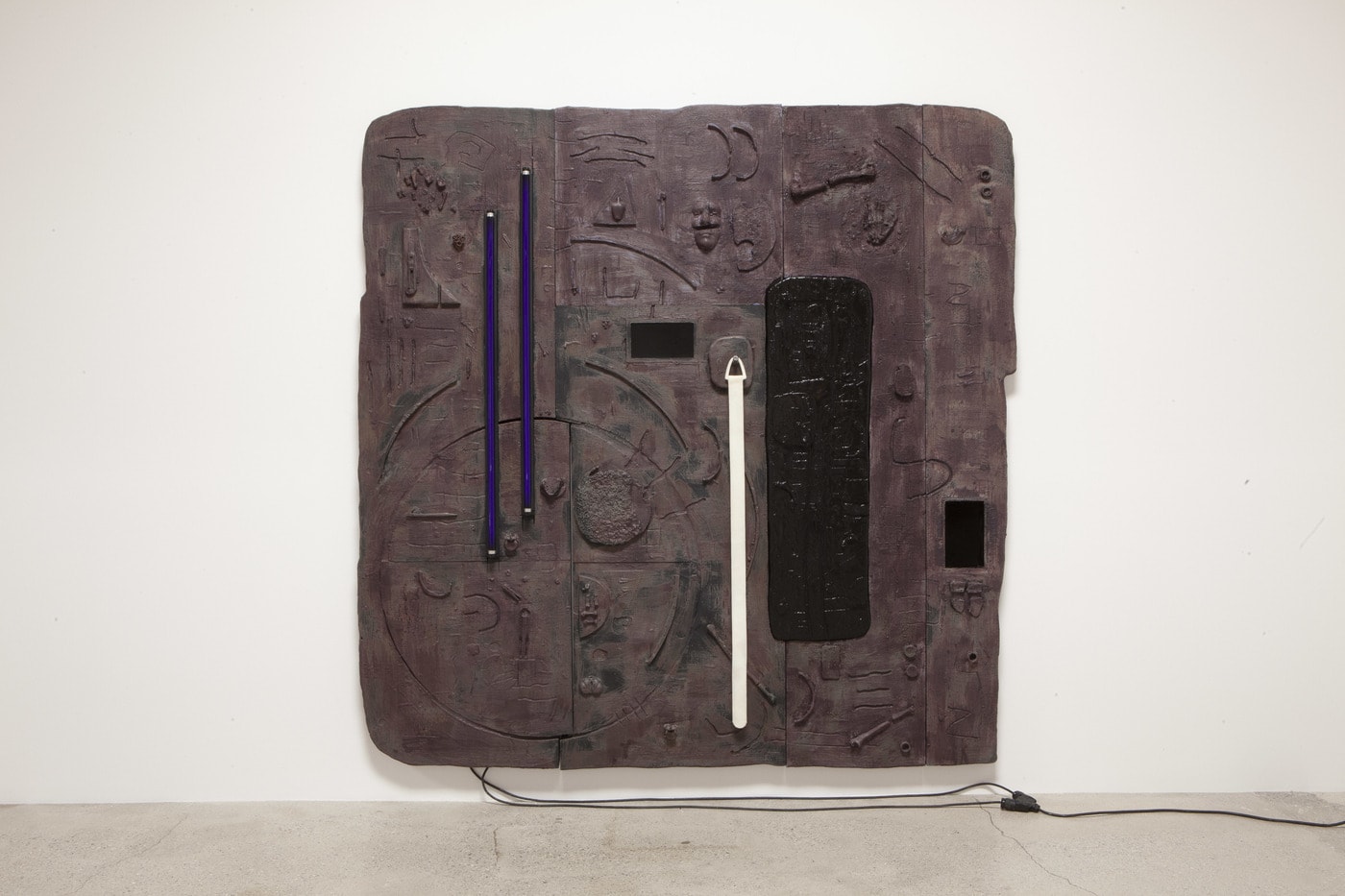 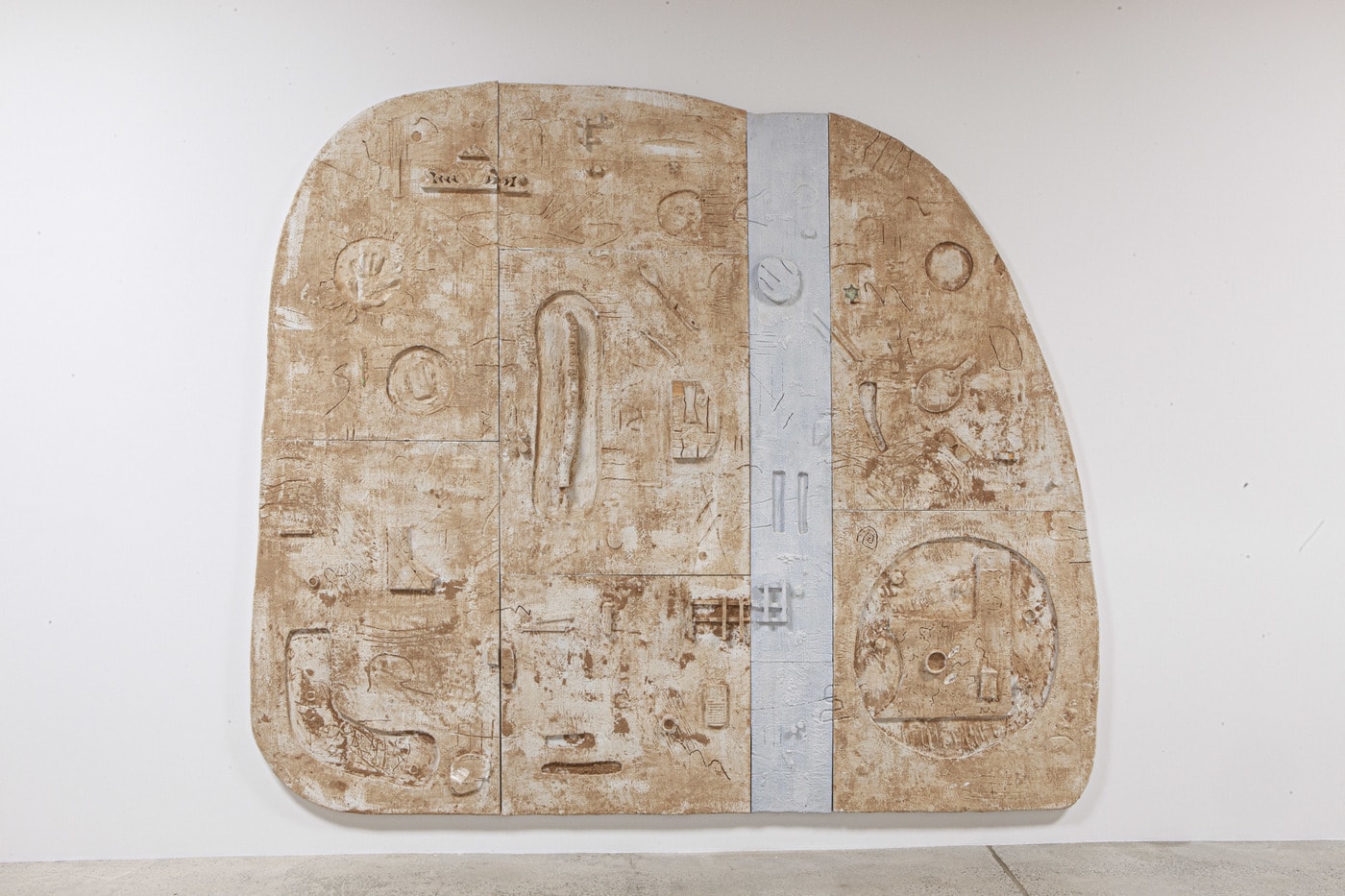 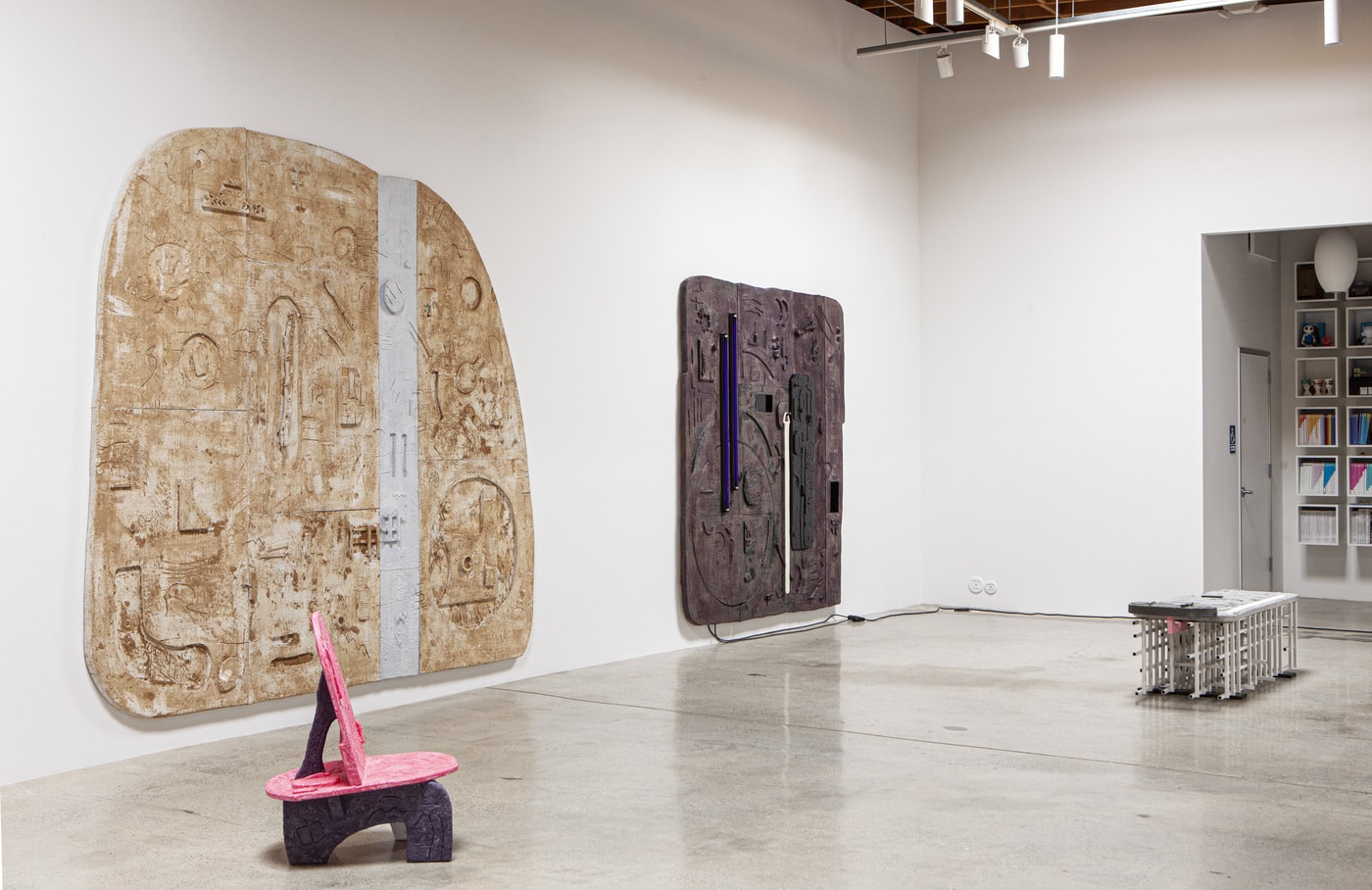 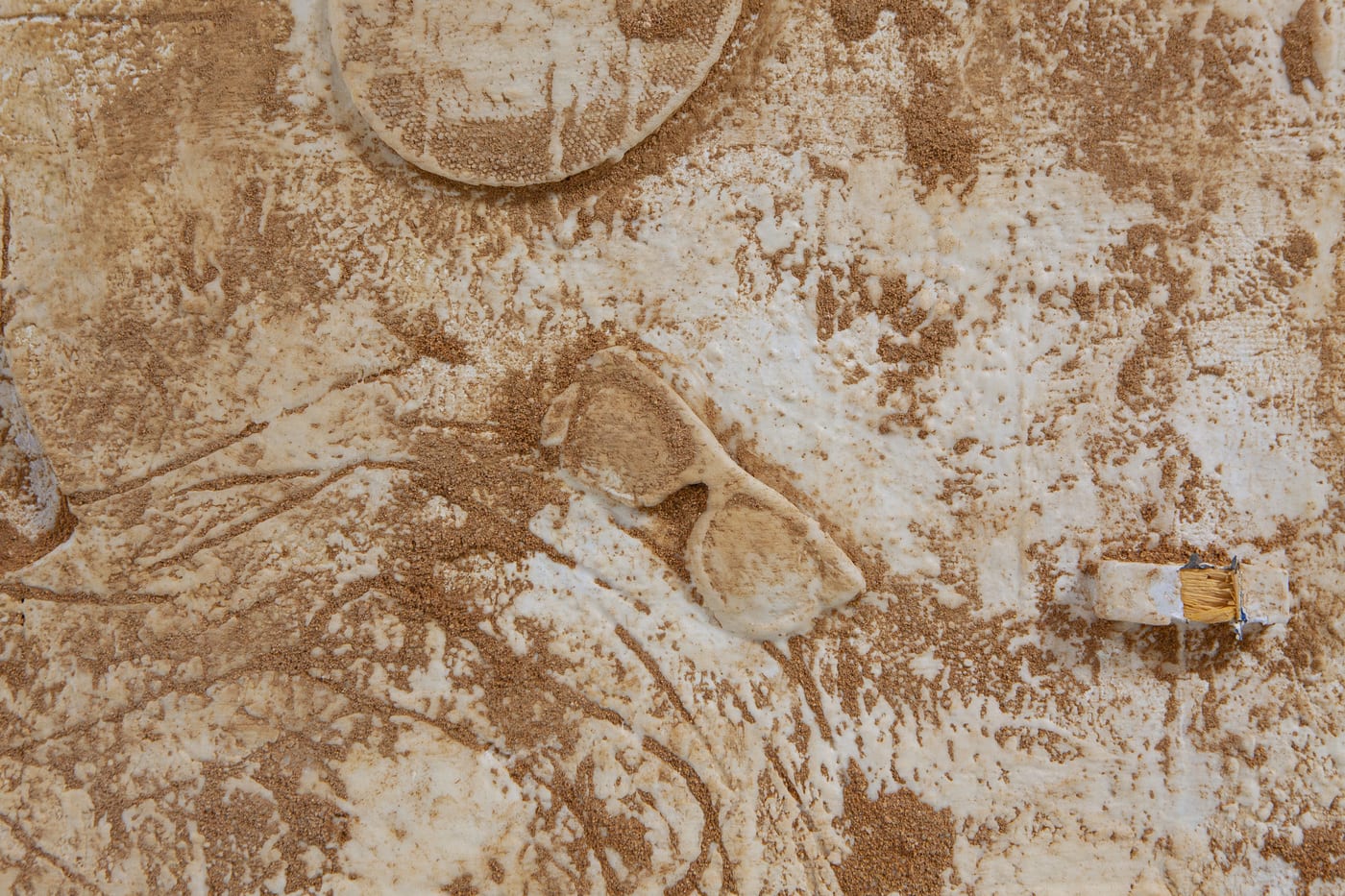 The sun burns in the stranger's eyes
Just one tear before he dies
Black mass can't ease the pain
There's nothing here, there's nothing sane

I’m sitting at a long glass table facing a much longer gallery space, high walls and a bow-truss ceiling.  On top of the table, a human skull carved out of a white, milky wax material sits alone on top of a book titled “Ministry for the Future''.  Considering the content of the book as fictional eyewitness accounts of the devastation wrought by global climate change (a massive oversimplification btw), I’ve always understood this still life arrangement acted as an entry point to the show.  Welcome to Tablets 2017-2021 at B___ (B Space) in Los Angeles. 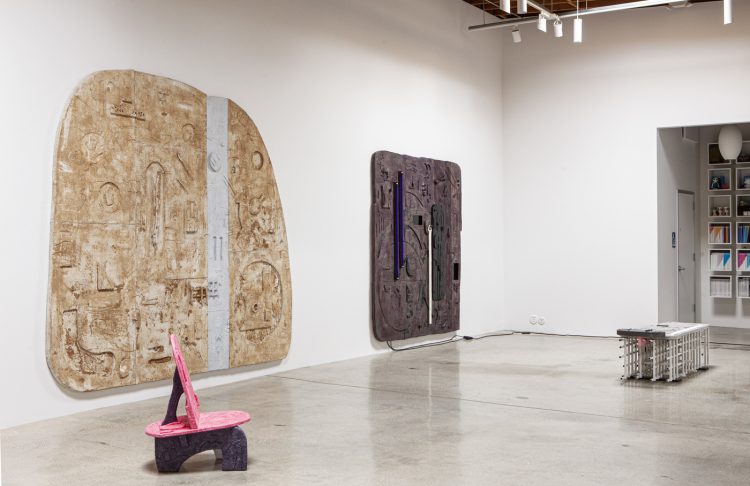 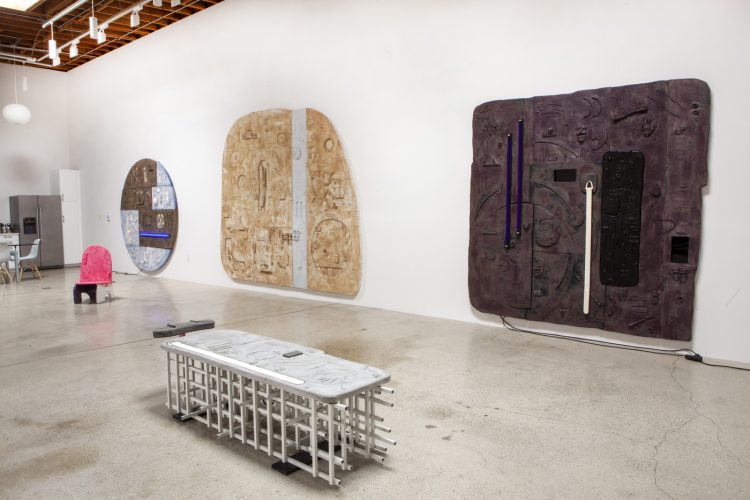 The artist Don Edler’s synopsis of the show makes mention of his interest in Biopolitics, materiality, history, human life and somewhere in here you’ll find “an archaeological love letter from the Anthropocene.”  All well and good, the work communicates a conceptual rigor and heft that commands attention.  I’ve been lucky enough to spend a lot of time here in this space, looking at Edler's work in various arrangements and configurations and within that span, it has naturally gone to work on me.

The reciprocal motion begins and my own human, infinite horizon is met by the configuration of material before me and the artist is no longer present.  I’ve long felt that the most meaningful, intimate time I spend with any artwork is by myself, with it and without anyone else passing information, dropping key phrases, and yikes, the dreaded post-grad, peer reviewed elevator pitch.  Let’s be honest, you’re not an authority, neither am I and there’s not a one on this planet that really knows what art is absolutely.  I understand it as something being perpetually defined in a way, but never becoming fixed – a precarious sculpture carried on a waiter's drink tray through heavy LA traffic.  What really matters is that it envelopes one in its own myth and seeks to assert itself as a continuity, a compartmentalized whole communing with its own history.  Here, the continuity that is Edler produced these objects. They emerged from the well of his own personal history, filled and emptied again and again by real, lived experience, a life in the trenches deeply committed to everything he reveals in his opening text. 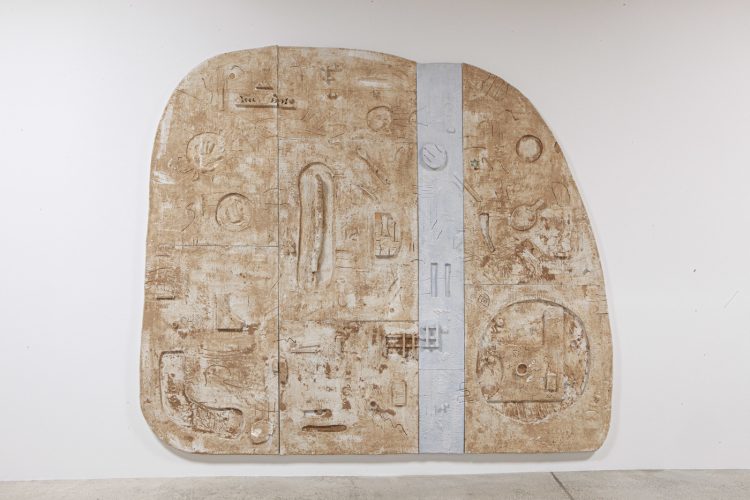 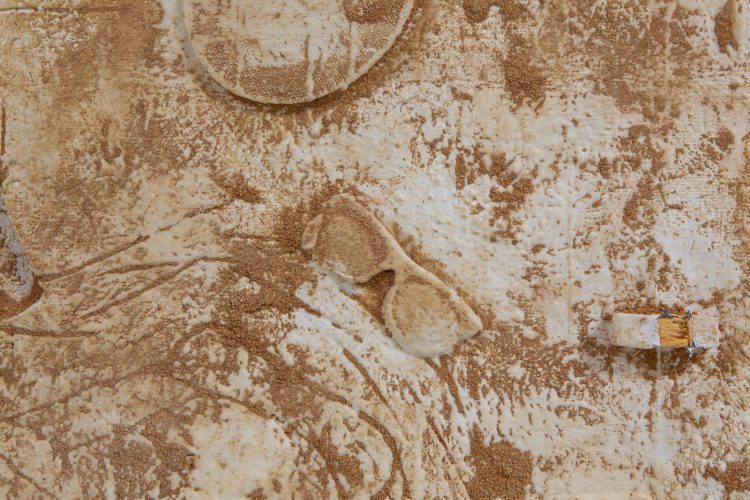 The matter-of-factness of the materiality has always both enveloped and alienated me, which is integral to the functioning of the whole.  The presence of these objects successfully communicate an uncomfortable truth about the contemporary conditions of our global and local, nested realities. They clearly eschew the seduction of aesthetics in favor of reveling in their insistence to exist and communicate from a world that at times feels as deeply and systemically inhospitable as Death Valley is to supple, hydrated human flesh.  The substrates contain the objects produced by our human civilization: bones, phone cases, knives and sticks, all within a matrix of a fixed and frozen index. These are anti-hydrated, giant tablets full of stuff and things, the Woman of Willendorf Stripped Bare of Her Flesh by Her Bachelors, Even, or should I say by the overwhelming, seemingly millenia long exposure to the burning sun.

Our centuries and centuries here have been collapsed within the space of the immediate present, it’s preserved and I’m seeing it all at once as Walter Benjamin taps me on the shoulder and hands me his essay, “Theses on the Philosophy of History”.  Just as quickly as he appeared, he began to dematerialize and on the way out he said to me, “Read and memorize section IX, it’s integral and always relevant to the present condition”.  He disappears, phantasmagorically and diaphanous, a specter of the ever-present:

A Klee painting named ‘Angelus Novus’ shows an angel looking as though he is about to move away from something he is fixedly contemplating. His eyes are staring, his mouth is open, his wings are spread. This is how one pictures the angel of history. His face is turned toward the past. Where we perceive a chain of events, he sees one single catastrophe which keeps piling wreckage and hurls it in front of his feet. The angel would like to stay, awaken the dead, and make whole what has been smashed. But a storm is blowing in from Paradise; it has got caught in his wings with such a violence that the angel can no longer close them. The storm irresistibly propels him into the future to which his back is turned, while the pile of debris before him grows skyward. This storm is what we call progress.

Edler’s collection of work, as art tends to do, acts as a revelation of a node of existence.  There are billions of lookers, all vast, irreducible, ineffable and always mysterious.  The artist as seer at the center of their own infinite universe, they are the observer in a concatenation of a perpetual unfolding, the character of which can express itself as challenging, urgent, suffocating and inescapable.  Edler’s work communicates this reflexively through a materiality that expresses the aridity of the present. 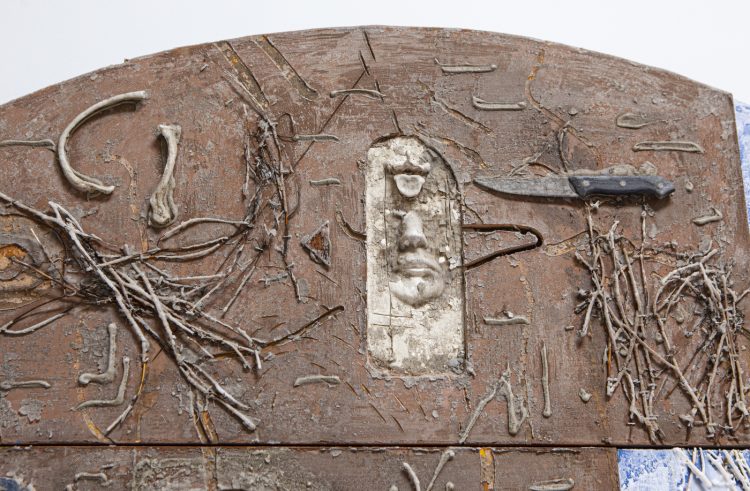 Visually, just as the matter-of-factnessness becomes clear, the works wash themselves out just as the UV from the sun bleaches the bones of animals.  Or humans.  It happens in real time before me.  This work was made for and from the desert and perhaps it’s from a theoretical future world that’s become completely inhospitable to life.  Maybe this isn’t so much a thought experiment and it’s here and now.  Giving this work the proper time it deserves leads one to get to the heart of the issue: Institutional power.  The failure of institutions, the lack of courage and total impoverishment of creative will and imagination by those with actual, administrative power will haunt us for our entire lives and bleach clean every last one of our bones.

Sherlock Holmes’ room is recreated at the Museum of British Antiques, designed by Kengo Kuma

‘You can touch it! Architectural Models Exhibition’ at WHAT MUSEUM 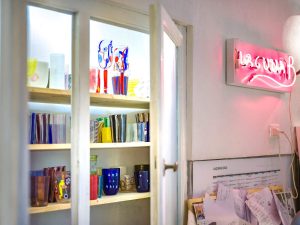 LAGUNA~B, THE LUXURY TABLEWARE BRAND THAT MELTS TRADITIONAL MURANO GLASS WITH ITS FUTURE