This designer’s love of music and movies has influenced much of his work, including a hotel in Paris which riffs on the music and fashions of the 1970s and ‘80s.

The German poet Goethe famously wrote that “architecture is frozen music.” In Paris, the team of Saar Zafrir Design behind the interiors of the new ReMIX Hotel has taken that insight to a new extreme. Riffing on a variety of music and fashion styles from soul and disco of the 1970s to pop and R&B of the 1980s, this hospitality haven is perfectly located in the multi-chambered heart of the city’s music venues, like Zénith, Philharmonie / Cité de la Musique, Grande Halle, and Cabaret Sauvage. 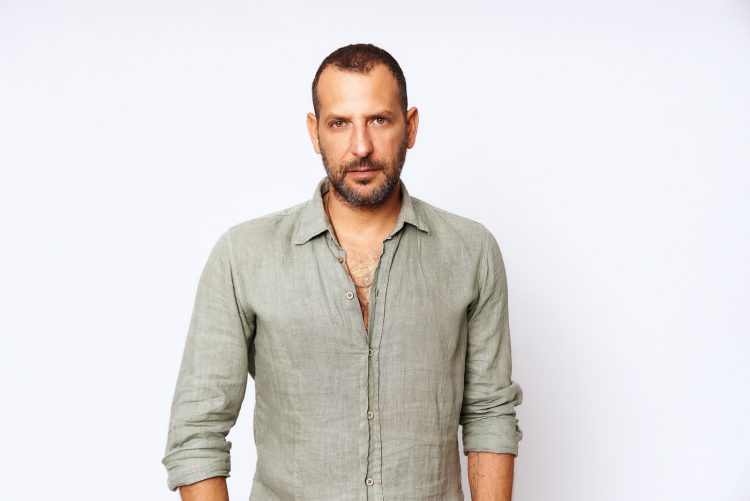 The hotel’s designer, Saar Zafrir, lists both movies and music as his muses. In his work, one can see the how the film “One Night in Paris” has left some creative fingerprints, or how that classic Bob Dylan song, “Forever Young,” became a touchstone for this hotel.

Youthful themes and preoccupations, including a golden boot on an old skateboard and Rubik’s Cubes, bold colors, optical illusions, and neon lights, proliferate, to show how such fashions change and youth is forever in transition. All in all, the interior design treads a fine line between celebrating and satirizing different styles from the 1980s that gave us musical films like Fame, Flashdance, and Footloose.

Most of the furniture was designed and custom-made by Saar Zafrir Design, including the neon wall signs, original artworks, wooden furnishings, light fixtures, and wallpapers and rugs referencing popular culture of the era. 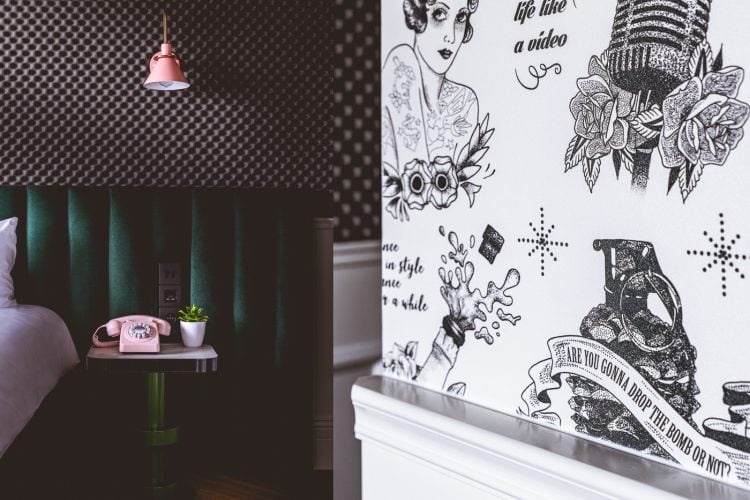 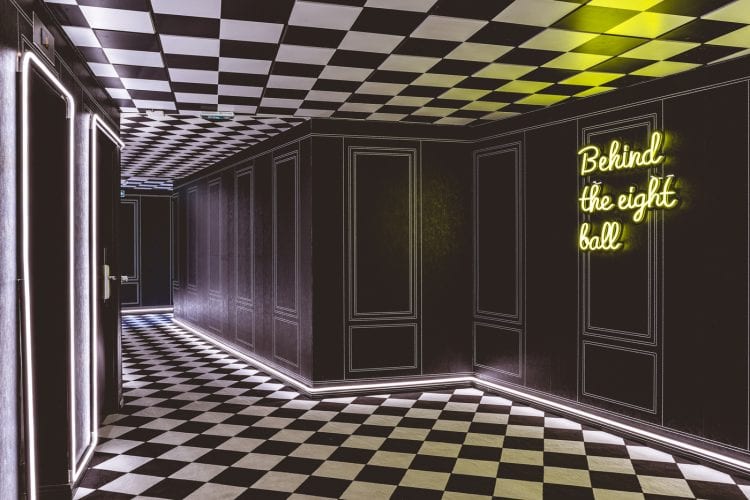 Via email we asked him which design aspect of the ReMIX was the most challenging to realize?

He replies, “I am a firm believer that design should never be limited by challenges. The challenges here were time pressure and the budget, which we implemented in creating an affordable luxury concept.”

As the leader of Saar Zaafrir Design, he is hands-on with every part of the project. His company helps their customers to race out of the starting blocks to leap over any hurdles and cross the finishing line, from concept to design and purchasing to construction. “Each project I take on is important to me, something I work on with passion. From sitting with clients, going through the concept in every detail and material selections, I love to be part of the entire process,” he says.

He also has a sense of humor, so his designs have lighthearted elements. For Exhibits A and B, check out the “ghetto blasters” (gigantic cassette players, for the millennials among us) in every room, and another anachronism, rotary phones in lipstick pink.

The ReMIX design was a complicated brief. The hotel has 10 meeting rooms for business travelers, a co-working space for freelancers and digital nomads, a music studio with instruments for guests to play, and some rooms (complete with bunkbeds) can accommodate parties of seven guests. 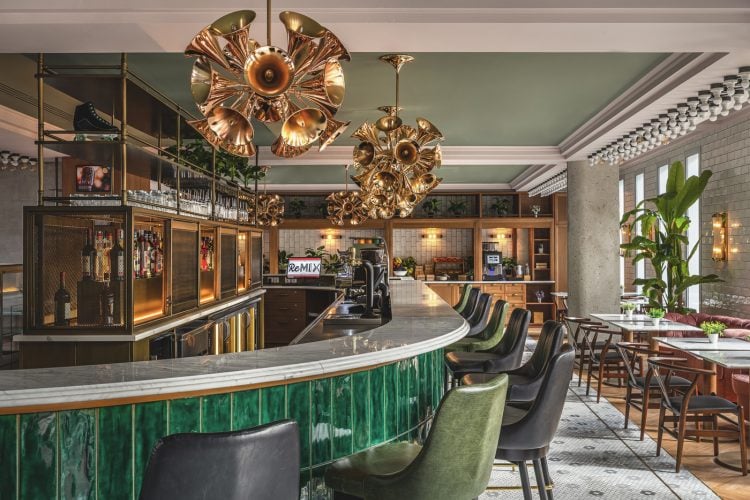 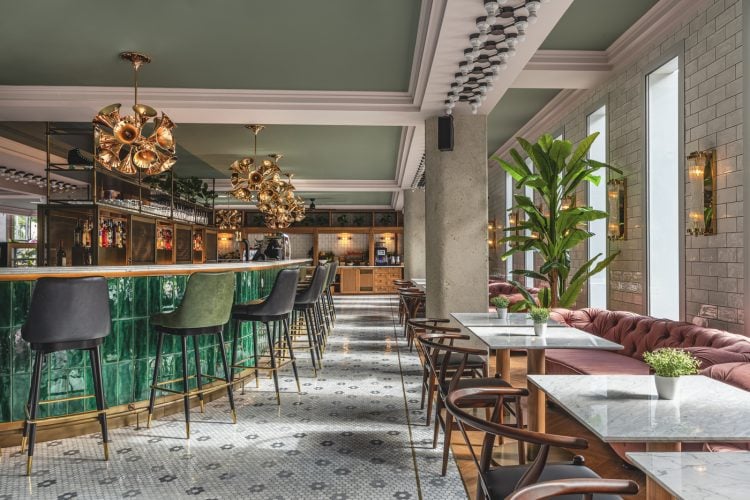 The hotel’s bar and restaurant, Marvin & the Gang, serves as both a centerpiece for the hotel and a showcase for the designer’s array of talents. It’s cool how he combined marble, velvet, and green glass in such a funky way that really does poetic justice to the restaurant’s theme of combining soul food from the American south with soul music of a similarly Afro-American vintage that marries audio and visuals. (The restaurants’ moniker combines the names of the music stars, Marvin Gaye and Kool and the Gang.)

Versatility is Saar’s strong point. When asked to describe his signature style, he replied, “Versatile. I don’t have one specific design signature. I have a method. Each design should tell a story and it’s important that the right story is being told, which organically fits the location, the budget and the overall concept.” 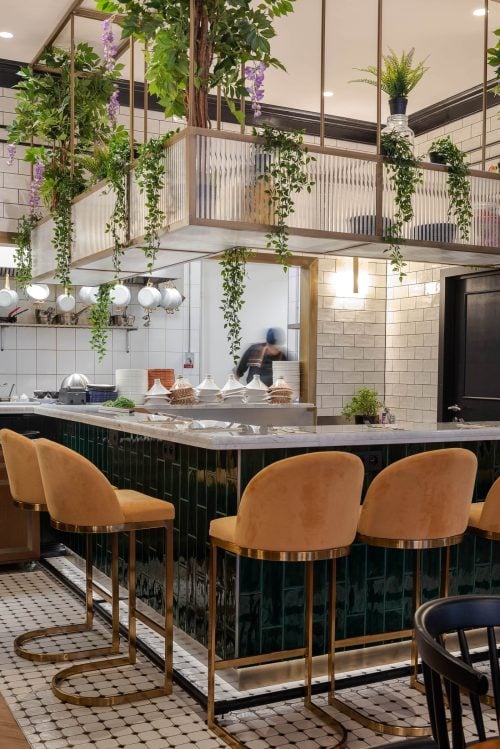 Having transitioned from the world of finance into interior design, a zig-zagging journey to say the least, he has worked on hospitality projects like the Brussels hotel Le Commérage, which opened a year and a half ago, as well as the hotel’s restaurant Le Conteur, ensuring that it stays true to its eastern Mediterranean roots with a mellow style. “The interior is intended to blend a European eclectic design with contemporary touches and plenty of color,” he says. “The meaning of Le Conteur is the Storyteller. The dishes served are stories being told and the restaurant has an ambiance that makes every night feel like your best friends’ wedding.” The jubilant vibe, redolent of Mediterranean cultures, inspires joy while encouraging people to connect. 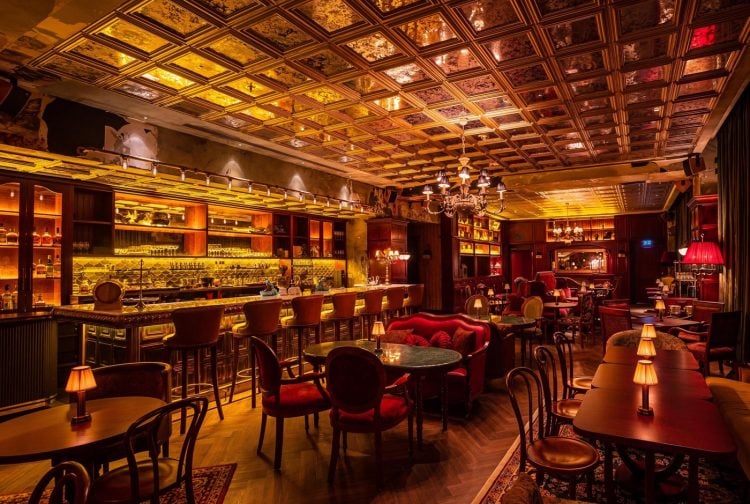 The Bellboy Bar in Berlin is a quirky, vintage-style bar. 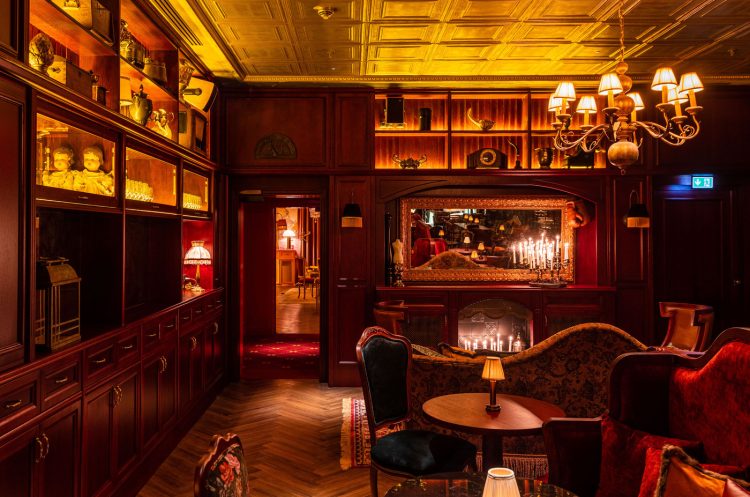 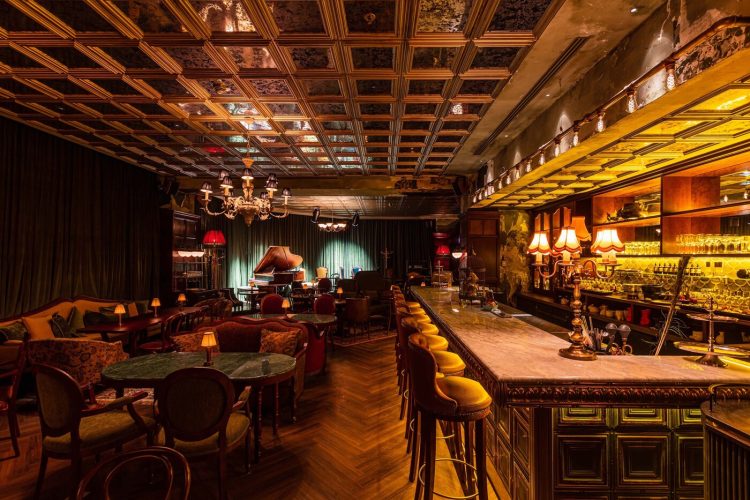 In building his brand as a diverse talent, fluent in a variety of visual languages, Saar also designed the Bellboy Bar, a special cocktail bar in the city’s Mitte district with four distinct spaces: the main cocktail bar, whereas the Butler is a speakeasy with a secret door, the Pink Room is perfect for intimate, private events, and the Art Room is a smoker’s lounge. With this project, he wanted to make the location feel like a real destination on its own and emboss this old hotel brand with some new stamps of creativity and character.

Now that he is primarily based in London rather than Amsterdam, we asked him about this change of address that might also connote other changes. “I really have a strong connection to Amsterdam, its monumental buildings and all else it has to offer. One of my design studios is based there and I still visit on a regular basis,” he says.

As for London, what he loves about the place is “the inspiration it gives me and the architecture overall. Being based here at this phase of my design career, lets me be close to the source, hospitality and lifestyle at its finest.”

One can easily imagining Saar thriving in such a cinematic and musical metropolis where multiple cultures converge, and the contrasts inspire new forms of creativity. 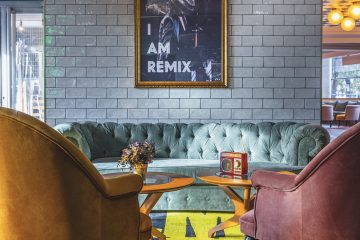 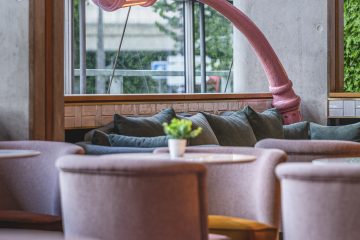 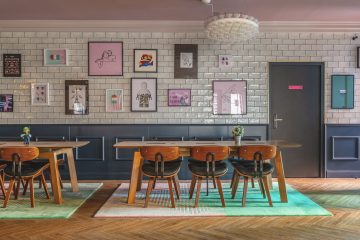 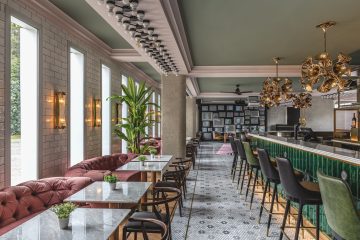 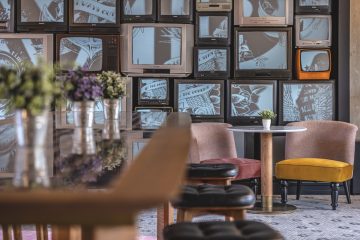 Submission Deadline06/09/2022
The submission has ended.

Hello my name is NFT”, an event introducing the “current form” of NFT art, was held at Laforet Harajuku

Aichi Prefectural Museum of Art features “Minimal / Conceptual: Dorothee and Konrad Fischer and the Art Scenes in the 1960s and 1970s”
〉 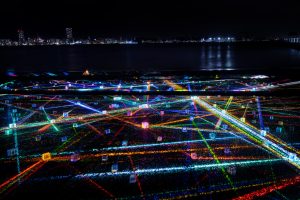